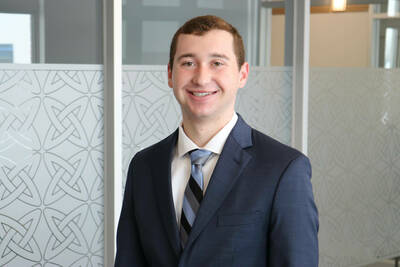 A team of three students who are pursuing majors in Applied and Computational Mathematics and Statistics at Notre Dame won second place in a national statistics competition with a project they hope will improve responses to earthquakes.

Senior Hakeem Ceesay and juniors Riley Mulshine and Reid VonDielingen submitted their project, “Number of Deaths Caused by Earthquakes” into the introductory division of the spring 2021 Undergraduate Statistics Class Project Competition. They had worked together as a team in Assistant Teaching Professor Victoria Woodard’s statistical methods and data analysis class. The competition is run by the Consortium for the Advancement of Undergraduate Statistics Education (CAUSE) and the American Statistical Association.

“We chose this topic because we wanted our statistical analysis to have an impact,” said VonDielingen, who is also majoring in finance. “Understanding how harmful earthquakes are to city infrastructure and society as a whole, we thought that diving deeper into the topic of how certain earthquake measures impact the number of deaths would lead to interesting and meaningful results that could be used to improve our responses to earthquakes in the future.”

The team was able to predict the number of deaths caused by an earthquake from its magnitude, intensity, and number of houses destroyed. They used several statistical processes, including regression analysis, the Akaike Information Criterion, the Durbin-Watson test, and various inflation factors, VonDielingen said.

Woodard’s fast-paced course starts with an introduction to statistical hypothesis testing and finishes with the study of time series – when data points occur in order over a period of time. Students are required to work in groups of two or three to analyze a data set and write a scientific report, she said.

“I was so excited that this team was selected as a winner in the competition,” Woodard said. “When I got the email that they had won, I immediately ran upstairs to tell my husband.  You would have thought that I had personally just won.

“I can’t tell you how proud I am of all of my students who submitted reports, and for this team especially, being selected as a winner in the competition.”

VonDielingen said the team knew that competition would be stiff, based on winning projects they saw from past years from other prestigious schools.

“We’re honored that the judges viewed our work to be on the same level as the other incredible projects submitted,” he said.

“I joked with my students when I introduced the competition at the beginning of the semester that if they really wanted to make me a proud teacher, they would beat Duke the following semester,” Woodard said.

This year, the team from Grinnell College came in first in the introductory division, with the Swarthmore College team in third. A team from Duke University, however, did place first in the intermediate statistics division.

Because of the Notre Dame team’s standing in the competition, they were asked to present their work at the electronic undergraduate statistics research conference on November 5. Ceesay, who is majoring in both ACMS and finance, represented the group at that conference.

“Our favorite part of the project was the teamwork that it involved and the knowledge we were able to gain,” VonDielingen said. “Professor Woodard was instrumental in helping guide us along the way to achieve our results, and we owe a lot of credit to her.”