Through research and service, history and neuroscience major examines the past and prepares for a future focused on helping communities build resilience 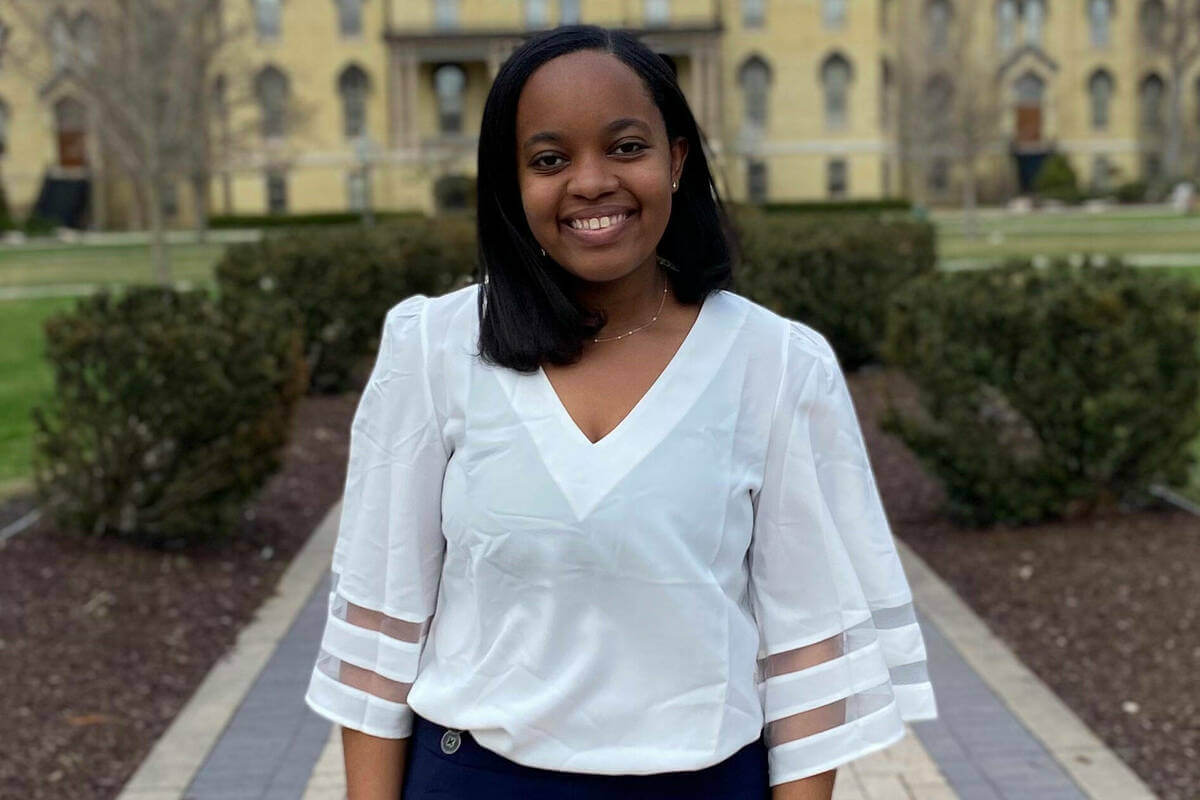 The image of Black inmates working in fields where enslaved African Americans once toiled has been seared into Notre Dame senior Aysha Gibson’s mind since she went on a high school field trip to the Louisiana State Penitentiary.

Gibson, a history and neuroscience and behavior major, is now writing her senior thesis about the prison to provide a deeper understanding of America’s penal system.

The independent research project, advised by associate professor Rebecca McKenna, considers race, morality, state law, labor, and geography — and is the culmination of an undergraduate career full of academic and service experiences that helped her consider how to support communities experiencing hardship.

Gibson, from New Orleans, came to South Bend intent on earning a bachelor of science in neuroscience and behavior to prepare for medical school. She was inspired to add a history major after taking a debate-style first-year seminar taught by Richard Pierce. The associate professor encouraged students to approach topics from multiple disciplines for more inclusive comprehension.

The class reignited Gibson’s passion for history. She values interdisciplinary educational opportunities, so adding a second major was a logical step. When considering whether to do a senior thesis, the field trip experience was still vivid in her mind, so she decided to take the plunge on examining a specific, narrow topic over a long period of time.

“This would be the first time I would undertake such an extensive research project, and I saw it as an opportunity to grow in my historical writing and analytical skills,” said Gibson, who credits her College of Arts & Letters courses with “exercising different brain muscles,” encouraging her to think broadly, and enhancing her ability to articulate clearly.

“History allows us to think critically about individuals and communities in various contexts and affords us the opportunity to shed light on the lived experiences of individuals who are typically not centered in conversations.”

The penitentiary is still called Angola — the home country of people who were once enslaved on the plantation. After the Civil War, a former major in the Confederate Army leased convicts from the state of Louisiana to do the labor. The state took control of the facility in 1901, and in 2010, 76 percent of its 5,100 inmates were Black.

Gibson said her research indicates that not a lot has changed at the “Alcatraz of the South” — the largest maximum-security prison in the United States — since the state assumed control. It’s still rife with reports of abuse, neglect, and inhumane conditions. Her archival research has included trips to Louisiana State Archives in Baton Rouge, where she examined penitentiary expenditures in the 1900s, and to the New Orleans City Archives, where she reviewed a record book of inmates placed in the penitentiary by the Orleans Parish Sheriff.

“The prison population is so segregated and shuttered from the public eye,” she said. Penal history is an important topic to study, she argues, because “these are lived experiences of marginalized people.”

History and neuroscience have much in common, Gibson has found, especially the ways in which they explore people through evidence-based methodologies and provide insight into how best to move forward.

“Neuroscience and history uniquely connect us to individuals, even if we are distant in time and place, and can make compelling cases for seeking positive change,” she said. “Both fields call for us to respect humanity.

“History allows us to think critically about individuals and communities in various contexts and affords us the opportunity to shed light on the lived experiences of individuals who are typically not centered in conversations.”

Neuroscience and brain health, in turn, ask us to think differently about how we care for ourselves and others.

“Our nervous system expects to be nurtured in the context of compassion and community, and the field of brain science gives us evidence for making change through building relationships,” she said.

Studying neuroscience has shown Gibson the importance of support systems and the ways in which strong communities build resilience — and she’s sought to learn how organizations do so during two Summer Service Learning Program experiences through the Center for Social Concerns.

Last summer, she served as a development and wellness intern at Covenant House in New Orleans, which annually cares for 900 young people experiencing homelessness, 85 percent of whom are survivors of physical abuse and/or sexual abuse, assault, or rape.

Gibson’s interest in working with children on the margins stems, in part, from her early life experiences.

“I was raised in an inner-city neighborhood that was disadvantaged in terms of socioeconomic resources,” she said. “So I have felt a responsibility to respond to the needs of communities like my own and to help foster better opportunities for the next generation.”

Gibson balances her classes and three-hour labs with walks around the lake and meals with friends, Bible study, naps, and interhall sports, especially basketball, which has been a constant for her since third grade.

This fall, she co-led the Center for Social Concerns’ U.S. Healthcare: Poverty and Policy Seminar’s immersion trip to Washington, D.C., over fall break. She said it was enlightening to view the health care system from within the Catholic social tradition and its emphasis on a commitment to the common good and centering marginalized populations.

Throughout her time at Notre Dame, Gibson’s research, community engagement, and studies have steeled her desire to be a primary care provider and helped her think deeply about her values and the type of person and professional she wants to become. She’s applied to medical schools and found the amount of writing she did in A&L courses helped her immensely in that process. Currently, she is considering pediatrics, emergency medicine, and neurology as specialties.

“I want to contribute to the positive development of the next generation,” Gibson said when describing her potential impact on future patients. “I want them to know I care deeply about them and their health, beyond the physical diagnosis. I want to leave a smile on their face and make them laugh when they’re anxious.”

“I want to contribute to the positive development of the next generation. I want (my future patients) to know I care deeply about them and their health, beyond the physical diagnosis. I want to leave a smile on their face and make them laugh when they’re anxious.”

Originally published by Beth Staples at al.nd.edu on January 10, 2022.