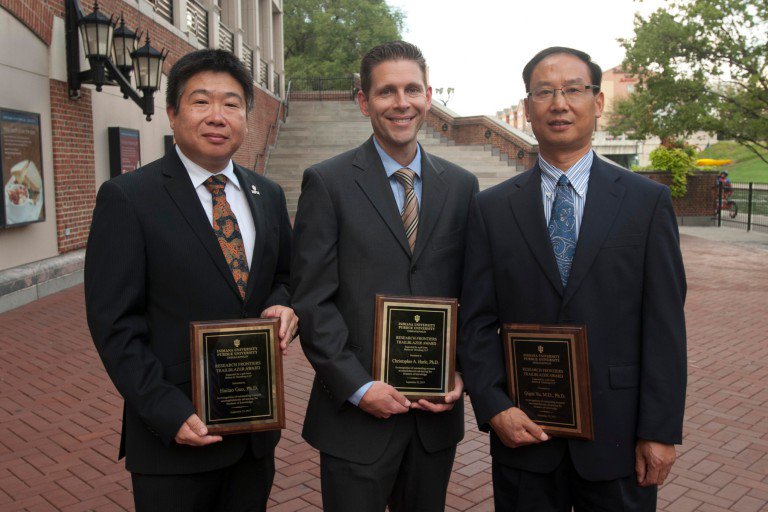 INDIANAPOLIS — Researchers from the Indiana University School of Medicine and the Richard M. Fairbanks School of Public Health have been named recipients of the 2017 Research Frontiers Trailblazer Award at IUPUI. Their work could impact lives around the world, as they aim to form new hepatitis B and HIV therapies and to keep chronic pain sufferers from opioid addiction.

The award recognizes outstanding IUPUI researchers who show promise in becoming nationally and internationally known for their research and creative activity. It is given to associate professors within the first three years of being appointed or promoted to that title.

Guo, an associate professor in the Department of Microbiology and Immunology at the IU School of Medicine, conducts research on the molecular biology of the hepatitis B virus to find new therapeutics to treat it. He said the virus has infected approximately 2 billion people worldwide, resulting in about 1 million deaths annually. There is no cure.

“Available drugs fail to eradicate the virus in the liver because it plants a special structure, called cccDNA, in the cell nucleus,” he said. “The structure is the mother ship for virus reproduction. It is resistant to current drugs, which only target the viruses it creates. Eliminating it is considered the holy grail for a definite cure.”

Guo and his colleagues are screening small-molecule compounds to find cccDNA inhibitors. Two are under development but have yet to undergo clinical trials with patients.

Harle is an associate professor in the Department of Health Policy and Management and the Ph.D. program director at the Richard M. Fairbanks School of Public Health, and an affiliated scientist at the Center for Biomedical Informatics at the Regenstrief Institute. He has received two National Institutes of Health grants. One supports the design of electronic informed-consent tools so people can decide whether to share their health information for research studies. Researchers want to study health information recorded in databases — including data about doctor and hospital visits, prescriptions, and diseases — to answer research questions.

“It is important that people have a say in whether their health records, which are private and often sensitive, are viewed for research studies,” he said. “We are testing multiple designs to determine what information is most useful for people when making this decision.”

“By understanding the decisions primary care clinicians face in caring for these patients, we can design computerized tools to better collect and communicate the information that clinicians need to help relieve pain while also keeping patients safe from addiction,” he said.

Yu is an associate professor in the Department of Microbiology and Immunology at the IU School of Medicine. His research focuses on the origin and development of HIV infection — the late-stage symptoms of which are referred to as AIDS — as well as its interactions with other long-lasting viruses. More than 35 million people have died during the HIV pandemic, and more than 36 million people worldwide are currently infected.

“My emphasis is on developing therapeutic approaches to eliminate HIV reservoirs, which are groups of infected cells that do not actively produce the virus,” he said.

Yu said the only effective treatment currently available for HIV-infected patients is antiretroviral therapy, or ART. It suppresses HIV production, but even patients who have been on ART for years still have the virus in their blood. Lifelong ART poses problems including toxicity, high costs and drug resistance, but interrupting it leads to a resurgence of HIV levels because of the reservoirs.

“Therefore, latently HIV-infected cells represent a major obstacle for HIV eradication,” Yu said. “My colleagues and I are developing approaches to purge these reservoirs in a move toward a cure.”

IUPUI Vice Chancellor for Research Simon Atkinson said faculty across all academic disciplines continue to strengthen the campus’s reputation with their research and creative activity.

“This year we recognize Haitao Guo, Chris Harle and Andy Yu, but faculty in all IUPUI schools are at the forefront of thought-provoking, pulse-quickening work,” he said. “The 18 distinct schools at IUPUI bring together some of the foremost experts in the nation to inquire about how we live, what makes us human and how we can improve quality of life. Their research and creative activity impacts not only Indianapolis residents, but citizens across the state, nation and world. The Research Frontiers Trailblazer Award recognizes and celebrates them and their work.”

A list of previous recipients of the Research Frontiers Trailblazer Award is available online.