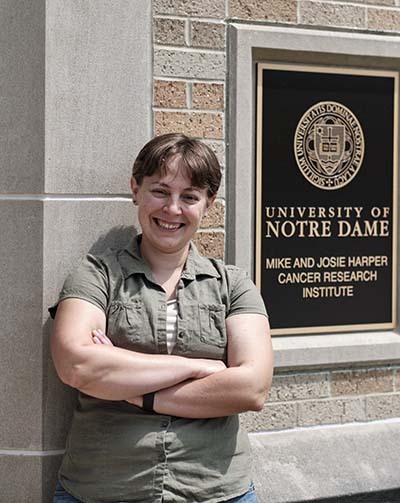 Even when walking her dogs, Rosie and Tristan, Erin Howe strives to make science accessible to a larger audience. Tristan is hereditarily blind and deaf, and neighbors’ questions about her have given Howe the opportunity to explain the basics of genetics to her community.

Genetics are particularly relevant to Howe’s work, too, at the Harper Cancer Research Institute (HCRI). In July 2021, she was promoted to the position of research assistant professor in the Department of Biological Sciences and at the HCRI, where she investigates how breast cancer spreads to the brain.

“I’m most excited about…the flexibility that it gives me to pursue the research that I want to do,” Howe said of the new role.

Howe researches how proteins travel within cells and how this process goes wrong in a person battling cancer. She hopes that her findings will help prevent metastasis, which occurs when cancer cells spread to other parts of the body. In the case of breast cancer, treatments have recently led to relatively high chances of survival if the disease remains in its original location, but metastasis is the leading cause of death.

As Howe explained, “Brain metastasis tends to happen five, ten, or twenty years [after cancer remission], and because patients are living longer, the incidence of brain metastasis is increasing, tragically. It’s also very difficult to treat, so we really need to know more, so we can do better for these patients.”

Howe earned her undergraduate degree in mechanical engineering at Rose-Hulman Institute of Technology in 2004. After she started a graduate program in aerospace engineering, Howe’s father was diagnosed with metastatic melanoma.

“He received targeted radiation and chemotherapy but continued developing new brain metastases, and I decided that fighting metastasis was more important and interesting than satellite control systems,” Howe said.

Howe then began a Ph.D in cancer biology at the University of Colorado’s Anschutz Medical Campus, which she completed in 2012. After working as a postdoctoral scholar at the University of Chicago, she arrived at Notre Dame in 2015 as a postdoctoral fellow in the lab of Siyuan Zhang, Dee Associate Professor in the Department of Biological Sciences. Howe became a research scientist here in 2020, before her current promotion to research assistant professor. She has authored over 20 articles in scholarly journals and was also honored with the Young Investigator Award at the Midwest Tumor Microenvironment Meeting and an Early Career Investigator Award from the METAvivor Foundation.

Because of her role as a research professor, Howe does not teach courses. However, she has enjoyed mentoring young scientists in the Zhang lab. “One of the things that I do really like about Notre Dame are the undergrads,” Howe said. “The third author on my paper is one of the undergrads who worked with me, Melanie Justice (‘19), and I brag about that all the time.”

Whether walking her dog or investigating protein trafficking and breast cancer brain metastasis in an HCRI lab, Howe hopes to share her interest in science with others. Her new position as research assistant professor will help her pursue this goal.

“I’m going to have more opportunities, ability to do research, and exposure, and that is going to help a lot,” Howe said.