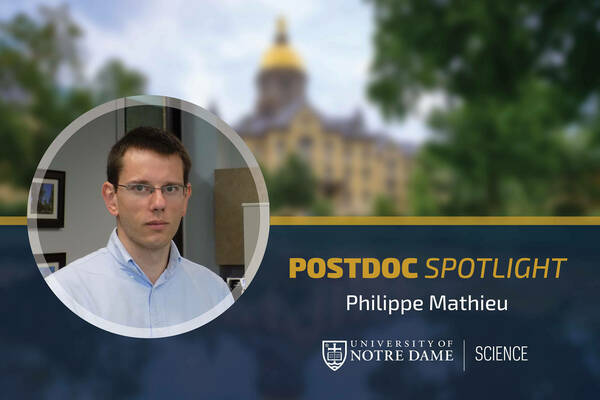 Although Philippe Mathieu is a postdoctoral researcher in the Department of Mathematics, he does not let the divisions between disciplines limit his quest for knowledge. Instead, Mathieu collaborates with both mathematics and philosophy professors at and outside Notre Dame in his research on quantum physics, as he explores the connections between these subjects.

Mathieu’s research incorporates quantum field theory and gauge theory, which are types of field theories that are invariant under local symmetries.

“There are several approaches to quantum field theory that are defined by mathematicians, but you do not compute any meaningful physical quantities out of this as far as I know,” he said. “And on the other side, you have the quantum field theory by physicists…that provides incredibly precise results on some highly technical experiments, although the mathematical justification of those calculations is unclear.”

Mathieu explained that while there are reasons to believe that what mathematicians and what physicists call “quantum field theory” is equivalent, they have not yet rigorously established connections between the mathematical and physical approaches.

“What’s fascinating is that we have an archipelago of facts, of results, and of theorems, and my job consists of finding some bridges between those things,” Mathieu explained.

Mathieu’s investigations into quantum field theory have brought him beyond the realm of STEM, as he collaborates with Nicholas Teh, associate professor of philosophy. Mathieu was introduced to Teh by doctoral candidate Laura Murray (née Wells), after she attended a seminar he gave in September 2018 and noticed links between their research. Mathieu, Teh, Murray, and University of Nottingham professor Alexander Schenkel wrote a paper together, and Mathieu hopes to publish more articles with Teh.

Mathieu has demonstrated this ability to move between disciplines throughout his academic career. Born and raised in Paris, France, Mathieu first studied engineering with a nuclear physics focus. He then completed a second Master of Science at Aix-Marseille Université in 2015, when he realized he was more interested in theoretical physics than the subject’s industry applications. Mathieu earned his doctorate at the Laboratory of Annecy-le-Vieux of Theoretical Physics in 2018, before coming to Notre Dame to assume his postdoctoral position.

Mathieu is grateful for the chance to deepen his theoretical understanding while at Notre Dame.  “Since I’m from a physics background, I take advantage of the opportunity to take graduate classes in mathematics in topics that I need for my research but about which I was not scholarly educated,” Mathieu said.

In addition to taking classes, Mathieu has also taught undergraduate courses, such as Calculus I, II, and III.

As he will finish his postdoctoral studies this spring, Mathieu looked back on his time at Notre Dame.

“I learned an incredible amount of things being here,” he said.