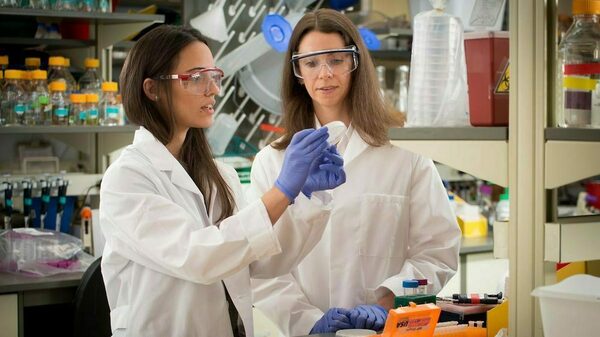 The Department of Chemistry and Biochemistry’s graduate program at the University of Notre Dame has moved up 17 places in rankings for “Best Chemistry Programs” by U.S. News & World Report.

Notre Dame now claims the 42nd spot out of 211 ranked schools. This significant improvement from the latest report in 2018 was the second largest change of any of the programs on the list.

“Our department has taken meaningful steps over the past decade to solicit feedback from external and internal reviewers, and we have made earnest efforts to implement improvements to our graduate program on many levels,” said Brian Baker, Coleman Professor of Life Sciences and Department Chair. “It is very gratifying to see the hard work of our faculty, staff, and students be recognized by our peers.”Graduate program rankings in the sciences are based on the results from reputational surveys sent to academic officials who rate the quality of programs on a scale of 1 to 5. These results are then averaged and used to determine the ranking of a given program.

Recent research in the journal Scientometrics by Mary Prorok, assistant department chair, and Masaru Kuno, professor, both in the Chemistry and Biochemistry department, provides a more detailed analysis of these rankings and their meaning. This study sought to find quantifiable metrics behind U.S. News’ 2018 peer assessment scores.

The study identified seven departmental and institutional metrics that correlated with the rankings. Research visibility and impact – judged by median “h-indices,” numbers reflecting the scientific impact of individual  professors – was found to be the most significant predictor of US News rank order. Two others included the number of tenure/tenure-track faculty members in a department and the  per capita research expenditures of those faculty members. In whole, these three metrics accounted for about 84 percent of U.S. News’ rank order of domestic graduate chemistry programs.

Other factors were related to the prestige of the program. This included the number of faculty inducted into the National Academy of Sciences, and whether the parent university was a member of the Association of American Universities.

“An inevitable concern with purely reputational rankings such as U.S. News involves anchoring, which refers to cognitive bias in raters,” Kuno said. Cognitive bias occurs when raters ascribe future value based on past results or rankings.

“For the specific case of graduate program rankings, this implies that a program’s initial 1994 US News rank is “sticky,” Kuno said.

Their study finds that while some degree of anchoring exists in U.S. News’ ranking of graduate chemistry programs, the likelihood of significant rank order increases with time. Kuno and Prorok’s study found that anchoring fades with every subsequent generation of raters.

“Therefore, it is not surprising that ND’s graduate chemistry program’s ranking has risen significantly as the Department has made sustained efforts in hiring and in infrastructure enhancements,” Kuno said. “The 17 spot-jump reflects peer recognition of these improvements.”

Steven Corcelli, chemistry professor and incoming chair of the department, was pleased with the new ranking, adding that the increase in rank also occurred because of hard work and dedication.

“Our faculty and staff have been tremendously committed to providing the very best training environment for our graduate students,” he said. “It’s a testament to their hard work and dedication that our reputation is growing.”

Other contributors to the study were physics doctoral student Shubin Zhang, Huy Huynh associate teaching professor if IT, analytics and operations in the Mendoza College of Business, and Thurston Miller, physical science librarian, Hesburgh Library.