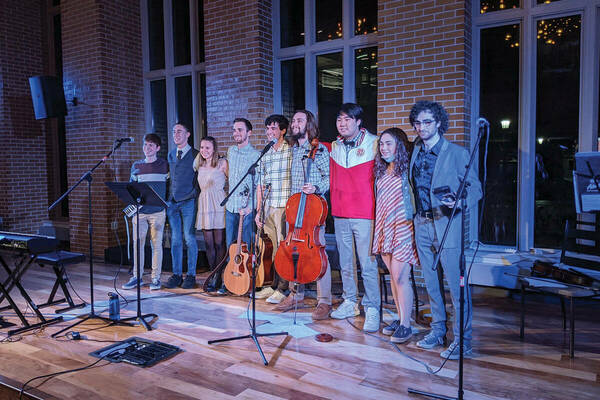 One may not think mathematics and music go together, but a group of Notre Dame honors mathematics majors say otherwise.

After taking two challenging math exams in one day, Notre Dame sophomores grouped up to play music to de-stress. They realized they enjoyed playing together, and “Heine Borel and the Finite Subcovers” was born.

The band name is inspired by the Heine Borel theorem, which the students had learned about in a math class during the fall semester. A set is heine borel if every open cover has a finite subcover in topology – and the band plays condensed covers of songs, which could be referred to as subcovers.

“Math definitely has applications in music, with respect to rhythm and harmony,” said Dooley. “Knowing how to do math also makes us automatically cooler and gives us street cred.”

Their debut performance at Acousticafe on January 27 in Duncan Student Center drew a crowd, including Dan Gezelter, professor in the Department of Chemistry & Biochemistry and associate dean of undergraduate studies in the College of Science. Gezelter, who attended because Dooley advertised the performance to a club he advises, described the event as “delightfully nerdy.”

Gezelter said he was impressed to see a wide array of talents from the honors math students, and noted that musical and mathematical talent often overlap and provide a creative outlet for students.

“Science and mathematics do require certain forms of creativity, but having a non-academic artistic interest is important for maintaining balance,” he said.

Through their performances, the band is hoping to alter viewpoints of mathematics students. “I think the biggest perception that we shatter is that math majors aren’t very outgoing,” Herzog shared. “There’s a classic joke that an extraverted mathematician is one who looks at YOUR shoes when talking to you, and the fact that we did a full performance really turns that on its head.”

The band practices informally with jam sessions and conducts serious rehearsals as needed prior to performances. Ironically, one of their favorite covers to perform is “Math Suks” by Jimmy Buffet.

Herzog described this experience as “one of the most fun things I’ve done at Notre Dame.” The group hopes to continue playing together throughout their time as undergraduates.

Heine Borel and the Finite Subcovers will next perform a concert in the basement of Hayes-Healey on Tuesday, February 22, 2022 at 9:30 PM,  as well as at Acousticafe on April 7 in Duncan Student Center. A link to their recent Acousticafe performance is here. For more updates about their performances and to contact the band, check out their social media here.