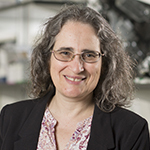 Marya Lieberman, Professor in the Department of Chemistry & Biochemistry, has been chosen as the winner of the 2022 J. Calvin Giddings Award for Excellence in Education. This award, sponsored by the American Chemical Society Division of Analytical Chemistry, recognizes one individual each year who has enhanced the development of students in the study of analytical chemistry.

Lieberman has worked extensively with students at both the graduate and undergraduate levels to leverage chemistry for the greater good. Over the past 10 years, Lieberman has spearheaded the Paper Analytical Device (PAD) Project, with the aim to develop low-cost, high-quality analytical tools that make a difference in the developing world. Employing user-centered design, manufacturing prototyping, and extensive field testing and validation, students are trained to leverage the power of analytical chemistry to make a real impact on the important and widespread problem of counterfeit or substandard pharmaceuticals.

The PAD is a complete lab-on-paper that can identify fake and substandard medicines, all for around fifty cents. The user does not need electrical power, chemicals, solvents, or expensive instruments to use the PAD, which is a game changing advantage in the developing world, as the World Health Organization estimates that less than a third of world governments can effectively regulate medical products and that one in ten medicines in low-income countries are substandard or falsified.

Lieberman has leveraged this work as a vehicle to train the next generation of scientists. Beyond her research lab at Notre Dame, the Distributed Pharmaceutical Analysis Lab (DPAL) Project, started in 2016, brings together partners in the developing world with students across the United States. In collaboration with Chemists Without Borders, samples of pharmaceuticals from Africa and southeast Asia are provided to participating labs at primarily undergraduate universities, and students then analyze these samples for potential problems. When any issues arise, the regulating bodies in the countries of origin are notified so that products may be prevented from being used. DPAL involves hundreds of undergraduate students each year in vigorous analytical study of real-world samples.

Additionally, Lieberman co-leads an NSF International Research Experiences for Students project entitled “Development of Novel Paper-Based Devices to Assess the Quality of Pharmaceuticals and Water in the Developing World.” This IRES sends graduate and undergraduate students to Kenya or Nepal each summer to gain valuable experience in hands-on analytical chemistry. Lieberman has also trained students to impact the local community through an initiative to test for lead in South Bend, Indiana. After reports identifying significantly raised lead levels in many South Bend children were published, Lieberman, as part of the Notre Dame Lead Innovation Team, led the development of low cost, scalable lead sample collection kits which have been used by homeowners or community or student volunteers to collect samples for analysis on campus. Tests are conducted by both university students and local high school students, and problem areas have been identified for remediation.

Lieberman will receive an award plaque and honorarium at the ACS Fall National Meeting this year in Chicago.

Originally published by Rebecca Hicks at chemistry.nd.edu on March 01, 2022.