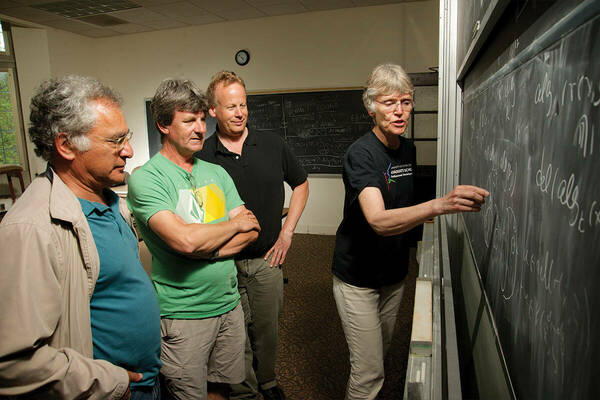 Julia Knight, professor emerita in the University of Notre Dame Department of Mathematics, was awarded a medal for outstanding contribution to mathematics from the Academic Council of the Sobolev Institute of Mathematics.

The Medal of the Institute of Mathematics of the Siberian branch of the Russian Academy of Sciences was given to Knight not only because of her work in the field of computational theory and mathematical logic, but also because of her extensive collaboration history with mathematicians in Novosibirsk, Siberia, Russia.

“I visited Russia many times and managed a grant for some time that facilitated cooperation among researchers from the United States, Russia, Kazakhstan, and more recently, also Bulgaria,” she said. “There was so much duplication that started during the Cold War, where someone would prove something first, and then someone else in another country would prove it, and sometime later the attributions would come out.

“Now we all work together, and have formed a really strong network,” Knight said.

Knight described the award as a big honor, noting that the meeting where the presentation will take place will be done virtually for those who are not in Russia.

“It’s been an honor to have Julia Knight as a faculty member at Notre Dame. This award recognizes Julia’s leadership of the field of computability theory, which has brought prestige to our department while she has generously passed along her expertise to many graduate students,” said Richard Hind, professor and chair in the Department of Mathematics. Our world-renowned logic group and successful graduate program owe very much to Julia’s tireless work over the years.”