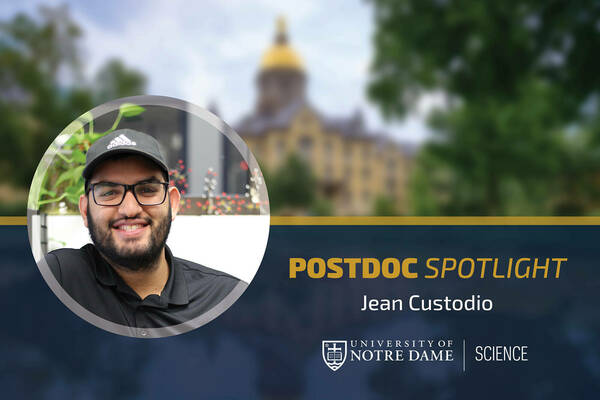 Jean Marcos Custodio is hoping to make an impact in the field of immunology during his postdoctoral research at the University of Notre Dame.

After receiving his doctoral degree in chemistry at the Federal University of Goiás, Custodio knew he wanted to connect his work on small molecules and crystallography to important applications. After a one-year internship working with Research Professor Allen Oliver, he met Brian Baker, Coleman Professor of Life Sciences in the Department of Chemistry & Biochemistry and department chair. Custodio liked Baker’s work on molecular recognition in the cellular immune system, and began his time as a postdoctoral researcher in the Baker Lab.

Custodio’s research at Notre Dame focuses on how the immune system molecules operate to fight infections, cancer, and, in the case of autoimmune diseases, its own body. He noted that this is different from the research he did to complete his Ph.D, which examined synthetic small molecules. However, his research background inspired him to seek a different approach to using small peptides. “I have always been curious about how I could use those molecules to do something important,” he said. “Something that can be used to solve problems more efficiently.”

Custodio is deciding on his career plans after completing his postdoctoral research. While he had always envisioned himself going on the academic job market for a tenure-track position, he is also considering entering the industry to work for a pharmaceutical company, like Pfizer. This, he said, would be “applying what I’ve been learning to solve problems, not only to teach.” The options excite Custodio, who feels that his past three years in the College of Science have been critical to his career discernment. “Being here, I can see that there are other paths, other fields, and other things I can do,” he said. “Talking to people here about different possibilities has been really good for me.”

For Custodio, being at Notre Dame has given him the opportunity to work in high-caliber research spaces with advanced facilities and equipment.

“The kind of research that I can conduct here depends on what I want to do, because I have access to do basically everything I want here with my research,” he said.

Outside of his lab, Custodio’s hobbies include photography, traveling, and playing instruments such as the guitar. He estimates that he will be at Notre Dame for one to two more years.