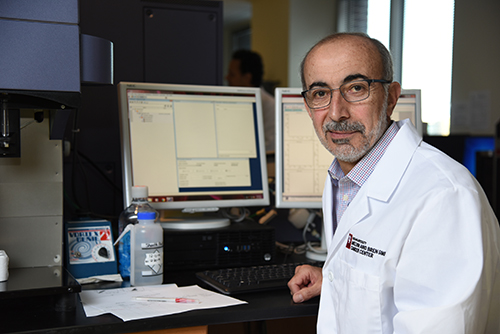 More than $3 million from the National Institutes of Health will allow Indiana University Melvin and Bren Simon Cancer Center researchers to improve understanding of the complex system of how hematopoietic stem cells (HSC) survive and sustain their function in the bone marrow.

More than $3 million from the National Institutes of Health will allow Indiana University Melvin and Bren Simon Cancer Center researchers to improve understanding of the complex system of how hematopoietic stem cells (HSC) survive and sustain their function in the bone marrow.

Edward F. Srour, Ph.D., the Robert J. and Annie S. Rohn Professor of Leukemia Research, and Melissa A. Kacena, Ph.D., professor of orthopaedic surgery, are building on a decade of research collaboration on how bone cells help HSC function. Both Srour and Kacena are Indiana University School of Medicine faculty.

HSC, which produce red and white blood cells, reside in the bone marrow in the core of bones. The complex system of multiple cell types that are responsible for maintaining those stem cells is called the hematopoietic niche.

“Years ago, we discovered that a molecule named CD166 is important for the maintenance of stem cells because it is also expressed on immature osteoblasts, the bone-forming cells that are an important component of the hematopoietic niche,” Srour said. Both young osteoblasts and stem cells interact together through CD166 to maintain stem cell function.

Researchers know that the CD166 molecule is critical because stem cells lose activity without it, but for which cells is it most important and which don’t need it?

With a $1.7 million grant from the National Institutes of Health, Srour and colleagues will delete CD166 from different cell types found in the hematopoietic niche to figure out where the molecule is essential and where it is not.

“Molecules and their receptors are basically like a key and a lock; you have a key on one cell and a lock on another cell,” Srour said. “With CD166, it is both the key and the lock—it binds to itself. We have to find who carries the most important lock and what does the turning of the key in that lock do to activate the cell.”

IU Simon Cancer Center researchers are also investigating another cell type formed in the hematopoietic niche called osteomacs, which are a specialized bone-resident macrophage. Macrophages are vital to the immune system with the job of engulfing and destroying foreign pathogens and sometimes cancer cells.

While macrophages reside in every tissue in the body, their jobs differ a little depending on location. Working inside the bones are specialized macrophages called osteomacs.

“We found that osteomacs play an important role in sustaining the stem cell function within the niche of the bone marrow,” Srour said. “The major struggle we have with these cells is they look like and function like bone marrow macrophages, so there is no easy way for us to separate one from the other.”

With a five-year, $1.5 million grant, Srour and colleagues aim to identify a molecule that allows them to separate osteomacs from macrophages.

In the search to find a distinguishing marker, researchers found that osteomacs—unlike other macrophages—express CD166. The molecule is vital to osteomacs, too; osteomacs that don’t have it lose their function. Now Srour wants to know why and form a better understanding of osteomacs’ role within the complex bone marrow environment.

Srour and IU researchers also have found that CD166 also is expressed on a rare population of myeloma cells that can initiate and make myeloma more aggressive. Multiple myeloma is a blood cancer of plasma cells within the bone marrow. Understanding the role of different cells in sustaining myeloma and identifying how to block CD166 in important cells of the cancer may provide pathways to stopping or slowing some cancers.

“We believe these are the cancer-initiating or so-called cancer stem cells,” Srour said.

Beyond myeloma, CD166 is present in many metastatic cancers, including breast cancer and pancreatic cancer. “The overexpression of that molecule is associated with the ability of cancer cells to metastasize (to spread),” Srour said.