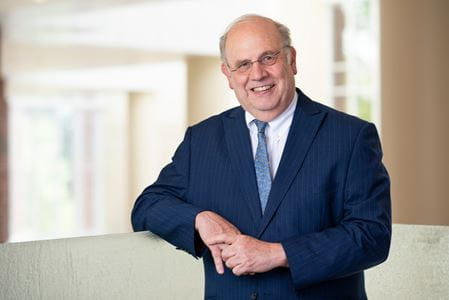 An Indiana University cancer researcher is leading an $11.4 million grant from the National Cancer Institute in which he and others across the country will work on identifying new treatments for tumors that develop in children, adolescents and adults with a common genetic condition.

An Indiana University cancer researcher is leading an $11.4 million grant from the National Cancer Institute in which he and others across the country will work on identifying new treatments for tumors that develop in children, adolescents and adults with a common genetic condition.

First awarded in 2015 by the National Cancer Institute, the prestigious Specialized Programs of Research Excellence (SPORE) is led by D. Wade Clapp, MD. Clapp is chairman of the Department of Pediatrics at IU School of Medicine, the physician-in-chief at Riley Hospital for Children at Indiana University Health and a member of the IU Melvin and Bren Simon Comprehensive Cancer Center and the Herman B Wells Center for Pediatric Research. The project co-principal investigator is Kevin Shannon, MD, professor of pediatrics at the University of California, San Francisco (UCSF) and a member of the Helen Diller Family Comprehensive Cancer Center.

Clapp will lead the collaborative research effort to develop new treatments for tumors that develop in neurofibromatosis type 1 (NF1), the most common inherited syndrome causing a predisposition to cancer. It affects one in every 3,000 people worldwide, with about 100,000 individuals living with the syndrome in the United States. Individuals with NF1 have an increased risk of developing specific types of benign tumors and cancers including some brain tumors, a rare childhood leukemia and tumors that grow along the nerves and can progress to become sarcomas.

“Our SPORE grant is distinguished by its strong childhood cancer focus and multi-institutional effort, which brings together a coalition of the best NF1 investigators in the United States and likely the world,” Clapp said. “The grant involves six major institutions and the Pediatric Oncology Branch of the National Cancer Institute. The number of children with these genetic diseases is relatively small, so this sort of structure allows us to get the trials done efficiently and expediently.”

A common underlying feature of these cancers is abnormal activity of a key signaling protein called Ras. The protein made by the NF1 gene normally restrains Ras signaling and this key “brake” is lost in tumors with NF1 mutations. In addition to playing a central role in tumors that develop in people with NF1, the NF1 gene is frequently mutated in cancers that develop in the general population such as breast and lung cancers, pediatric and adult brain tumors, melanoma and acute myeloid leukemia.

The Ras protein is involved with more than a third of all cancers, and this research could lead to new therapies for many other cancers, Clapp said.

“Our SPORE team applies data generated in the laboratory to guide the development of innovative clinical trials,” Shannon said. “This new NCI grant will allow us to extend this ground-breaking work that is evaluating a number of promising treatments for decreasing abnormal Ras signaling.”

One of 63 SPORE grants throughout the country, the IU grant remains the only one focused on childhood cancers. Additionally, while most SPORE efforts focus on a single cancer, the IU-led program—called the Developmental and Hyperactive Ras Tumor (DHART) SPORE—is working to develop new treatments for different tumors and cancers that develop due to NF1 mutations.

“In the past five years, the group has completed a series of basic studies and clinical trials that have led to the first-ever FDA drug approval for NF1 and successful trials that are encouraging for new treatments in peripheral nerve tumors and myeloid leukemia,” Clapp said. “In this renewal, we are building on that work as well as initiating a new project focused on brain tumors that occur at higher rates in adolescents and young adults with NF1.”

In addition, the SPORE grant includes a Development Research Program and a Career Enhancement Program, which provide funding to early-stage and established investigators to conduct research on NF1 and contribute to the overall goals of this work.

“The groundbreaking work done by this group in this SPORE has already been paradigm- and practice-changing and has fundamentally impacted patients in the most positive of ways,” said Kelvin Lee, MD, director of the IU Simon Comprehensive Cancer Center. “I believe the advances by Dr. Clapp and his team are only going to accelerate with this renewal.”