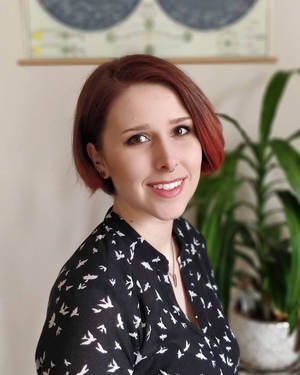 Erika Holmbeck ‘20 Ph.D. was awarded the 2022 Dissertation Award in Nuclear Physics from the American Physical Society (APS) for her thesis about the rapid neutron-capture process (r-process), including actinide production in the early universe.

She is the first student from the University of Notre Dame to receive the award.

“Being the first Notre Dame student to win the APS Dissertation Award definitely speaks to Notre Dame’s growth as a place where innovative research takes place,” Holmbeck said. “What means even more to me personally and professionally is that my astrophysics-focused work was recognized for its nuclear physics impact.”

Holmbeck’s doctoral thesis sought to understand where elements like thorium and uranium were made, and how they were formed. It included work under the direction of both Rebecca Surman, professor of theoretical nuclear physics, and Timothy Beers, Grace-Rupley Professor of Physics. Under Surman’s direction, she studied theoretical nuclear astrophysics, and under the direction of Beers, Holmbeck worked on astronomical observations.

In addition to the award from the APS, she previously was awarded the NASA Hubble Fellowship, a highly competitive fellowship that will allow her to continue her research at Carnegie Observatories in Pasadena, California.

Notre Dame provides a unique combination of faculty with interests in astronomical observations, laboratory measurements, and nuclear theory, all of which Erika combined while doing her research, Beers said. The observational work that formed the basis for her thesis is a part of the ongoing R-Process Alliance effort, a group of astronomers who are collecting large numbers of stars that have elevated abundances of elements associated with the r-process. The number of stars known will be expanded based on Holmbeck’s planned observational program while at the Carnegie Observatories.

“The department has great mentors who really know how to support their graduate students; for example, I can’t thank Prof. Rebecca Surman enough, because not only did she always have time in her busy schedule to guide and teach me, but she also had the patience and trust in me when I came to her with what I thought were ‘crazy’ ideas,” Holmbeck said. “Turns out, those ideas were what made my thesis stand out.”

Peter Garnavich, professor and chair of the Department of Physics, said he is proud of Erika’s achievement.

“Erika was an outstanding graduate student at Notre Dame, not only in her research, but also in her contributions to the department and work with the Westville Prison Initiative (an initiative that brought physics instruction to inmates at the Westville Correctional Facility in Westville, Indiana),” he said.

Holmbeck said the interdisciplinary nature of her dissertation, and the accolades it received, makes her optimistic for other collaborations at Notre Dame in the future.

“I see this as a promising step for even more extensive interdisciplinary studies where we can maximize our knowledge across different fields of physics,” she said.