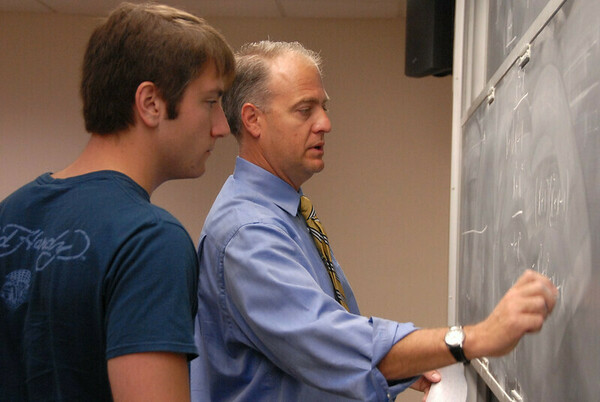 Matthew Gurksy, professor in the Department of Mathematics, has been named a Simons Fellow for 2022.

The Simons Fellows programs in Mathematics provides funds for faculty up to a semester-long research leave from classroom teaching and administrative obligations. The foundation’s mission is to advance the frontiers of research in mathematics and basic sciences.

Gursky will be on leave next academic year, working on ongoing research projects with collaborators at the Scuola Normale in Pisa, Italy, at Princeton University, and at the University of Auckland, New Zealand. He also will be working on a project with his colleagues at Notre Dame. Gursky studies geometric analysis, a field where he uses ideas and techniques from mathematical analysis, such as differential equations, to study problems in geometry.

“Since the mathematical description of physical principles is often framed in purely geometric terms, many of the problems I study have their origin, either directly or indirectly, in physics,” Gursky said.

He described his work by using the physics medallion on the floor of the Jordan Hall of Science Galleria as a guide. That medallion shows Einstein’s field equations of general relativity. On the left-hand side of the equation is the symbol for a quantity describing the curvature of space-time, which is a geometric quantity.  But this quantity can also be expressed in the language of mathematical analysis, in which case it is shown as a differential equation.

“Consequently, in this one equation you can see quite concretely the interaction of physics, geometry, and mathematical analysis,” Gursky said. “There are examples from many other fields where you can see the same interaction: acoustics, materials science, image processing, and more.”

I am extremely honored to be named a Simons Foundation Fellow; James Simons was a brilliant, original mathematician, and the foundation he and his wife Marilyn founded provides support for exciting research in the mathematical, physical, and biological sciences,” Gursky said. “It is a privilege to be included in this year’s class of Fellows.”