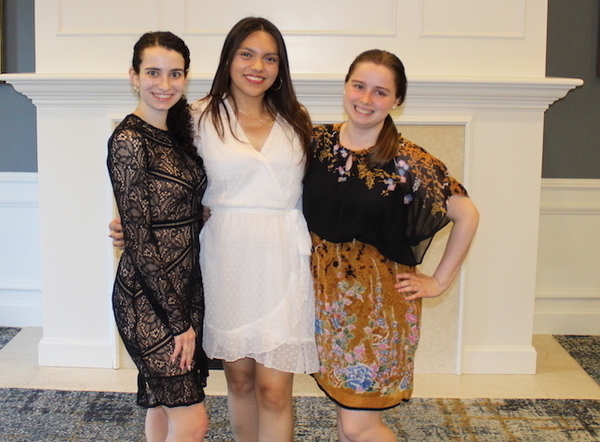 How does a university produce leaders?

At Notre Dame, the Institute for Latino Studies has sought to answer this question through a unique, merit-based scholarship and academic initiative known as the Latino Studies Scholars Program.

During Commencement this weekend, three newly-minted graduates carried with them the distinction of being only the second cohort to finish their studies as LSSP scholars. They’re now to fulfill their promise as transformative leaders working for the common good.

The program has grown rapidly since its inception in 2016, with 22 students on campus this past year, and ten more to come in the incoming class of 2026.

Before walking the stage, however, Yanik Ariste, Stacy Manrique, and Lorena Morejón-Lasso, along with their families, were honored at a special dinner last Friday at the Morris Inn.

He, along with former co-director Timothy Matovina, worked together to create the program six years ago. Their vision was that LSSP would train the next generation of leaders for the Latino community, the fastest-growing and youngest population in the U.S. and Catholic Church.

“Our goal is to prepare our merit scholars to support and empower Latinos all over the country,” Fraga said at the dinner. “These three are magnificent examples of that. And I look forward to seeing what they do.”

The three women join last year’s inaugural class of five LSSP graduates. They, like the class before them, have served as one-on-one mentors to first-year merit scholars, a practice designed to foster community among the students.

Here’s more on the second cohort of LSSP graduates:

“ILS provided me with the academic background to deepen my understanding of my community and so many others. The classes I took armed me with the terminology and concepts to describe what I witnessed growing up. I have had so many of these transformative moments since coming to Notre Dame, thanks to the Institute for Latino Studies.”

“Thanks to my wonderful education, I feel more than prepared to be ‘a powerful force for good’ in this world, lifting my community with me as I rise. Thanks you, ILS, for offering me a home away from home, for always believing in me, and for the immense support and friendship you have offered me and my family!”

“As I look toward my future career as a physician, I am confident that Latino Studies and the ILS family will continue to ground me in my efforts to become a transformational leader for Latino communities.”

Originally published by Oliver Ortega at latinostudies.nd.edu on May 19, 2022.