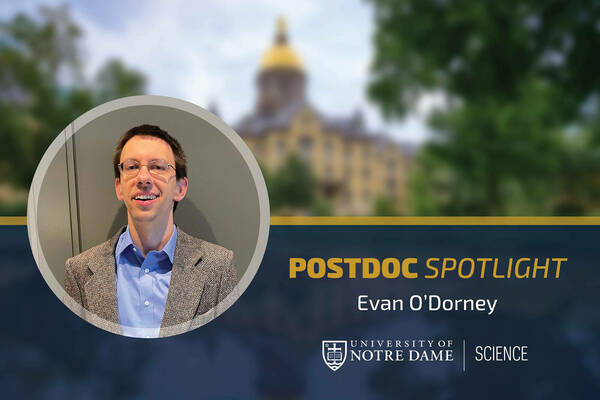 As a postdoctoral researcher in the Department of Mathematics, Evan O’Dorney is bringing new insights to the ancient subject of number theory.

“Number theory is one of the oldest and deepest branches of mathematics; it’s the study of the properties of the counting numbers, the integers,” O’Dorney explained. Number theory is used in fields like cryptography and cybersecurity, but O’Dorney said, “I’ve never been especially excited by the applications of mathematics, I do it for the sheer beauty of it, which is what they’ve been doing for two thousand years.”

O’Dorney finds not only beauty, but also spirituality in his studies, and he appreciates working at a Catholic university like Notre Dame.  “It’s a joy to have faith and also to do my research,” he said. “It’s never guaranteed that there will be people [studying mathematics] for the glory of God, and I think that’s what really sustains it, and I hope I do my part to keep it alive.”

In fact, O’Dorney’s faith helped create the connection that brought him to Notre Dame. In summer 2012, he befriended Eric Riedl at the University of Minnesota, Duluth, Research Experience for Undergraduates in Mathematics. Riedl was a staff mentor in the program, and they attended mass together. Eight years later in spring 2020, Riedl, now an assistant professor in the Department of Mathematics, emailed O’Dorney about a postdoctoral opportunity.

O’Dorney’s passion for academics started young. In 2007, he was the Scripps National Spelling Bee Champion. He graduated from Harvard College with a BA in mathematics in 2015, where he was named a Putnam Fellow three times and received an honorable mention for the Morgan Prize. He also earned the Churchill Scholarship, which funded one year of postgraduate scholarship for him at Cambridge University in 2015-2016. He then returned to the United States to complete his PhD in mathematics at Princeton University, where he was part of the National Science Foundation Research Fellowship Program.

“I’m always growing. As we go through the different stages of our career, we learn to take more ownership of whatever we do,” O’Dorney said of his educational development. “I was fortunate because even before I started grad school, I knew who I wanted to work with, Manjul Bhargava of Princeton, and he gave me a problem that was just stunningly beautiful, and I worked on that for 5 years, almost 6 years, and never got tired of it.” This summer, O’Dorney plans to return to the problem, which comprised his dissertation, polish it, and publish it in a mathematical journal.

Throughout his postdoctoral studies, O’Dorney has discovered he enjoys teaching as well as research. Currently, he teaches Introduction to Mathematical Reasoning, a proof-based class for math majors. He has been able to make friends with his students, and he hopes that he can pass the joy of the subject onto them, as well.

“I think the impact will be that some children and young people will take my classes or come across my research results and realize that math is beautiful and [they] can do it, too,” O’Dorney said.