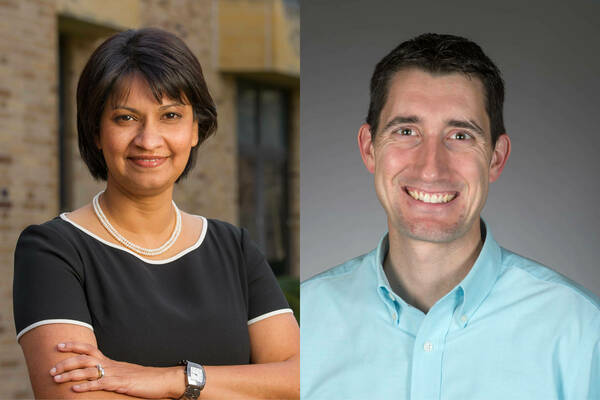 Two professors in the Department of Biological Sciences have been named to scientific editorial positions at open-access journals.

Crislyn D’Souza-Schorey, Morris-Pollard Professor, was named as one of two editors-in-chief of the Federation of American Societies of Experimental Biology (FASEB) BioAdvances journal. Also, Cody Smith, Elizabeth and Michael Gallagher Associate Professor, was appointed to the Public Library of Science (PLoS) Biology Editorial Board.

D’Souza-Schorey had served as an associate editor of FASEB BioAdvances since 2021, and was excited about being offered the opportunity to be an editor-in-chief.

The FASEB organization represents 30 scientific societies and has a membership of more than 130,000 researchers worldwide. It publishes the FASEB Journal, FASEB BioAdvances (open access), and Washington Update.

“I have been a proponent of open-access publishing because of the broad and inclusive reach it engenders,” D’Souza-Schorey said. “It is important to develop a journal editorial structure that is as diverse as the research community it represents, both scientifically and demographically.”

The open-access journal is fairly new, having launched in 2018. As editor-in-chief, D’Souza-Schorey hopes to see the journal grow with increasing quality and impact and expand its global reach.

“We’d like to see FASEB BioAdvances become a trusted venue for impactful research and scientific discourse in the biological and biomedical sciences while taking full advantage of the open access platform,” she said. “I am really quite excited by this appointment, and very honored to be chosen for this role.”

“It is a mark of distinction to be an editor-in-chief of a journal,” said Jason Rohr, the Ludmilla F., Stephen J., and Robert T. Galla College Professor and Chair in the Department of Biological Sciences. “It gets her name, and Notre Dame’s name, out there to show how good we are in the biological sciences.”

The other editor-in-chief is Yung Hou Wong, chair professor in the Division of Life Science at Hong Kong University of Science and Technology.

Smith, in his new role with PLoS Biology, will be one of the academic editors to oversee neuroscience manuscript submissions. He will work closely with staff editors to help identify whether a paper should continue in the review process. Once peer reviews are returned, he will assist the staff editors with interpreting the reviews and making a decision on whether the paper will be published.

PLoS Biology is one of the more widely recognized journals in the field, noted Smith, who earned tenure last year.

“It’s a really cool opportunity to be able to work with authors to publish their papers, and also to help the community to identify impactful work, which is what I’m excited about,” he said.

Smith’s editorial board appointment is impressive given Smith’s early career stage, according to Rohr.

“PLoS Biology is a great journal,” he said. “This is an honor for him and Notre Dame.”