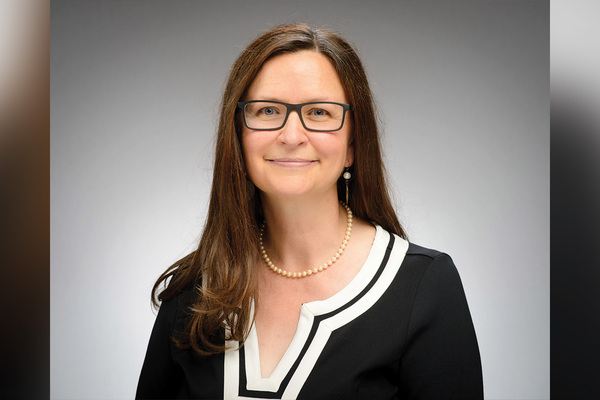 Patricia L. Clark, the John Cardinal O’Hara, C.S.C., Professor of Chemistry and Biochemistry and associate vice president for research at the University of Notre Dame, has received a prestigious Director’s Pioneer Award from the National Institutes of Health. These awards are given to exceptionally creative scientists advancing high-risk, high-impact research. Clark is the first researcher in Indiana to receive this distinguished award since the program’s inception in 2004.

“I was elated when I received the score for my proposal,” Clark said of the historic award. “The research questions that my laboratory is pursuing are fundamental questions about how biomolecules are synthesized, fold and function. I am honored that the review panel, which was composed of both clinicians and basic science researchers, appreciates the importance of understanding these fundamental mechanisms in order to ultimately improve human health.”

Clark, who is also director of Notre Dame’s Biophysics Instrumentation Core Facility, uses bacteria as a model for her studies, but her goal is to discover mechanisms that apply to all organisms, including humans.

“Patricia Clark conducts extraordinary and innovative research, and we are so proud that she does that work here at Notre Dame,” said Marie Lynn Miranda, the Charles and Jill Fischer Provost of the University of Notre Dame. “The prestigious NIH Director’s Pioneer Award indicates that the University is cultivating the people and the environment for groundbreaking research.”

Proteins are long, linear polymers built from a set of 20 standard amino acids. In DNA, each amino acid is “coded” by a chain of three nucleotides in a row, called a codon. Though there are only 20 standard amino acids, there are 64 possible codons. Therefore, most amino acids can be encoded by more than one codon. From the discovery of codons in the 1960s, it was assumed that substitutions between codons that encode the same amino acid were inconsequential because they preserve the protein’s amino acid sequence. But more recently, researchers including Clark have discovered that these “silent” codon substitutions can have consequences for protein production and folding.

“It has become clear that synonymous substitutions at the DNA level can affect the structure that a protein will fold into,” Clark said.

Many important diseases are caused by what happens at the biomolecular synthesis level long before patients exhibit any symptoms, said Santiago Schnell, the William K. Warren Foundation Dean of the College of Science.

“Professor Clark’s research will lead to entirely new concepts and will use new approaches to understand how molecules inside the cells are synthesized and function,” he said. “Her findings will propel basic biomedical research, and in the long term will lead to improvements in human health.”

Historically, it has been difficult to study changes in how proteins fold inside a cell, creating an incomplete picture of the extent to which codon substitutions contribute to the process. Clark’s goal is to break through these technical challenges. Using a common laboratory strain of the bacterium E. coli, her research group will develop a screening tool that will help determine which types of proteins are most sensitive to synonymous codon substitutions. The ultimate goal of the project will be to develop a predictive understanding of how synonymous codon mutations affect our susceptibility to genetic diseases.

“We recently celebrated the twentieth anniversary of the sequencing of the human genome. Since that time, we have sequenced so much human DNA that we have begun to learn which DNA mutations make us more susceptible to certain diseases. Surprisingly, some of these mutations are synonymous codon substitutions.

“Understanding how these synonymous substitutions affect protein folding therefore holds the promise of helping us better understand the molecular basis of disease, so we can design more effective interventions,” Clark said.

Clark’s Pioneer Award was one of only 10 awarded by the NIH this year and one of 106 grants made in NIH’s High-Risk, High-Reward Research program, representing approximately $329 million in funding over five years.

“The science put forward by this cohort is exceptionally novel and creative and is sure to push at the boundaries of what is known,” NIH Director Dr. Francis S. Collins said in a press release. “These visionary investigators come from a wide breadth of career stages and show that groundbreaking science can happen at any career level given the right opportunity.”

Clark joined the University of Notre Dame’s Department of Chemistry & Biochemistry in 2001. She is a recipient of the Biophysical Society’s Michael and Kate Bárány Award, a CAREER award from the National Science Foundation, a Medical Research Award from the W.M. Keck Foundation, and has twice received Notre Dame’s Rev. Edmund P. Joyce, C.S.C., Award for Excellence in Undergraduate Teaching. Before joining Notre Dame, she spent four years as a postdoctoral scholar at Massachusetts Institute of Technology, funded by an NIH National Research Service Award fellowship. Clark holds a bachelor’s degree in chemistry from Georgia Institute of Technology and a doctorate in molecular biophysics from the University of Texas Southwestern Medical School at Dallas.