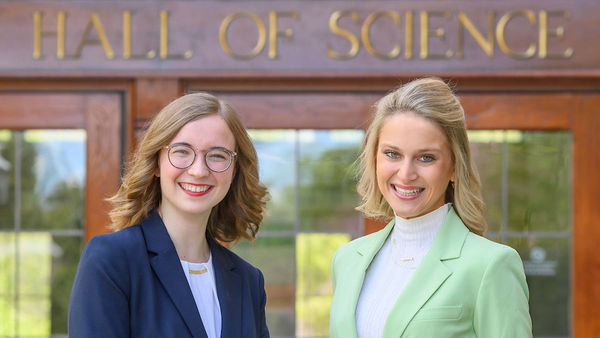 October 21, 2021
This post was originally published on this site

When Madeline Owen, University of Notre Dame Class of 2021 valedictorian, and her family would go on vacation, they would always drive rather than fly.

“It was always about the journey, rather than the destination, and we would meet such incredible people along the way with such incredible stories,” said Owen, who graduated with a degree in neuroscience and behavior and a minor in poverty studies and plans to become a physician.

She and Alexis Waldschmidt, University of Notre Dame 2021 salutatorian who majored in biological sciences and Chinese, shared about their journeys during their time at the University and described several reasons why that sense of discovery, rather than a specific goal for high grades, helped them rank at the top of their class.

As a child, Waldschmidt was fascinated by biology. Even at a young age she would sit and stare at a blade of grass and be completely overwhelmed that scientists couldn’t recreate one.

“There’s just so much to learn about the complex beauty of the world,” she described.

With interests in English, philosophy, and business, in addition to a love for the Chinese language, Waldschmidt was unsure what her second major or minor would be, and let her interest level in all her classes guide her. Originally she thought she would like to be a doctor, but after two years of study she felt a pull toward genetics. During her junior year she moved away from the preprofessional track and into research.

She made the change after realizing what she really liked about her school-break job as a certified nursing assistant at a nursing and rehabilitation facility.

“I loved working with the residents and teaching people about what I was doing, and that’s when I realized my passion was in teaching,” said the Naperville, Illinois native. “I recommend that students follow their passion, and don’t be scared to change your path just because of what other people say.

“Ask a ton of questions, learn about yourself and the topic, and evaluate the answers, because that’s where your discoveries are made.”

Owen, from Columbus, Ohio, knew since she was a child that she wanted to be a physician, despite neither of her parents working in science or medicine. Though medical school was her goal all along—she will study at Northwestern University Feinberg School of Medicine beginning in the fall—she added a minor in poverty studies so she could learn more about the world through relationships and service to others.

As part of the minor, Owen visited with families at the Texas-Mexico border, where she not only met children whose lives she hopes she touched, but also met with Sister Norma Pimentel of Catholic Charities, who discussed with the Notre Dame students matters of human dignity and what it means to be a migrant in the 21st century.

“All of that was so transformative,” Owen said, describing how Sister Norma shared the importance of going beyond textbooks and exams and working toward incremental change.

She and Waldschmidt stressed the importance of utilizing one of Notre Dame’s biggest strengths—the willingness of professors to help students. Professors are rooting for students, Owen said, and they want them to succeed.

“They are so supportive of students, and it’s very unique to Notre Dame,” she described, noting that many of her friends who went to other universities didn’t feel as free to approach professors. “It’s important to recognize and leverage it, and embrace it, because there will be full-on tough semesters to get through. Reaching out is a lifelong skill that is valuable to whatever profession you decide to pursue.”

Waldschmidt said that she had always been one to ask a lot of questions, and go to office hours to chat (almost for fun). However, she learned to be more specific and intentional with her questions after freshman year. General Chemistry 1 had started smoothly, and she received high grades on her first two tests. The score on her third test, unfortunately, was 25 percent lower.

And there are only four tests.

“After the third test, I thought, well, I guess I’m terrible at this topic. I had to think about how to approach studying in college,” she said, adding that it’s important to fully understand the topics at hand, and not simply memorize answers to get a good score on a test. “Honestly it’s pretty lucky that I didn’t get anything but an A in that class, but it taught me a valuable lesson about how to approach problems I was not naturally adept at.”

Because of that one misstep, Waldschmidt, whose professional goal is to become a professor in biological sciences, adjusted her approach and worked to build a solid foundation in all topics based on understanding, because “once you understand it all, it carries with you.”

Owen encountered many challenges at the beginning of her sophomore year, with “one setback after another so close together that it felt like there wasn’t time to recuperate.” She learned to compartmentalize some of the problems just enough to succeed, realizing there are many aspects of life one can not control.

Her advice: Dig deep for strength and know that your strength will get you through.

“You can control how you react to things, and how to work with what you have,” she said. “Sometimes it takes being flexible and adjusting, and finding your values, to solve problems.”

Both Waldschmidt and Owen recommended that no matter how well students want to do in academics, they should leave room for the full college experience. For Waldschmidt her happy places were playing violin with the orchestra, spending time in Chinese class, hanging out with friends, and working in the lab.

For Owen, that meant going to football games on Saturdays, among other activities.

“My high school was small and the weekend experiences, especially surrounding sports, were limited, so when I came here I really wanted to embrace that,” she said. “I’m a runner so I also ran the Holy Half, and did Storm the Stadium. And my friends are very important to me, truly, because relationships are the currency of our exchange. At the Thanksgiving table, who’s going to be there? It’s going to be a friend or family member.”

Both students looked fondly at their past Notre Dame experience and wish the same for students who are graduating after them.

“My final piece of advice is, don’t worry about checking boxes, and don’t stop yourself from doing things you might be interested in,” Owen said. “Let your experience be limitless, and let there be no boundaries.”